On the 15-16 of March 2015, the two-day 3D stereo photography workshop, which was supported by the Foundation for Somalia, has been completed. Six people of various nationalities attended the workshop: Iranian, Brazilian, Ukrainian, Polish and Indonesian. Indeed, the number of participants were not as many as registered.
Speaks Syaiful Bahri, the Intercultural Incubator member

The workshop was planned in a way that the participants practice directly in class. This method is intended for quick learning the basics of stereo photography, such as stereo base, editing photo, adjusting disparity image etc . Participants were encouraged to make their own 3D photos.

As a instructor, I only gave practical guidance during their learning. The theory was given only at the beginning. It was especially to introduce the basic concept of stereo photography. In addition, I draw various simple diagrams on the whiteboard to explain the basic concept for easier and faster understanding: 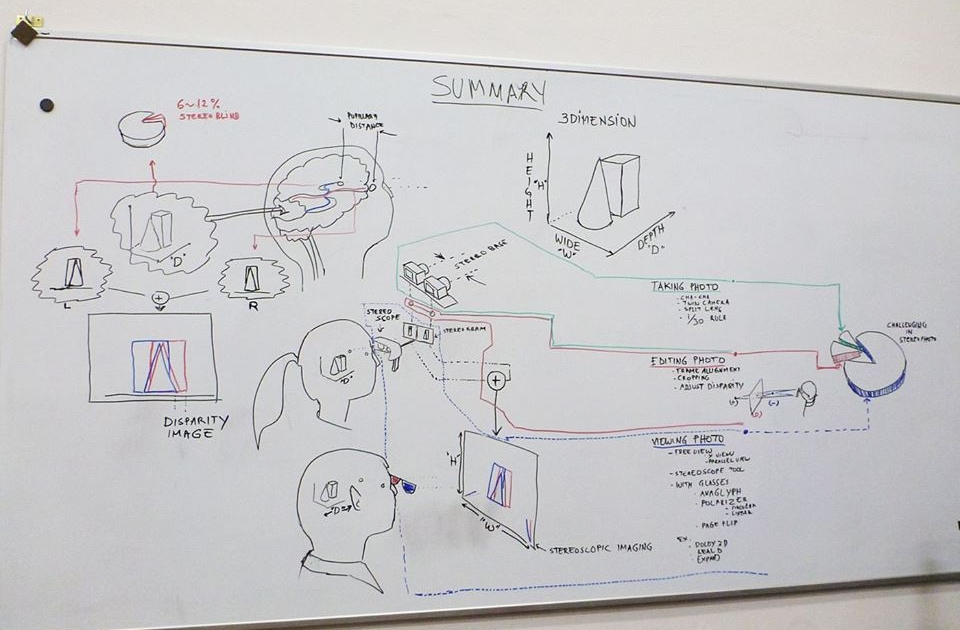 How did we work?

All the participants must have brought their own computer and a common camera (non-3D camera). The technique for making 3D with a single camera is called ?cha-cha? technique. It means taking two photo by shifting a single camera from left to right. After taking a photo, the participant processed the photo in their computer for align two frame of photo. In this part, participant must adjust the disparity image to meet the standard of stereo photo which the observer should be feel comfortable to enjoy 3D (depth) imaging.

As an intermezzo, participants watched three videoclips which contain the collection of 3D photos from experienced stereo photographers and stereo photographer clubs around the world. The workshop was greatly supported by Tomasz Bielawski and Borys Wasiuk (founder of Polski Klub Stereoskopowy) who lend some materials for demo and 3D glasses.

On a second day, the workshop was focused on improving skills by taking a lot of photos. At the end of workshop, the participants were able to handle the important control/parameter in stereo photography. Each person had produced between 4 and 10 photos. All photos were uploaded to web based group in flickr as 3D anaglyph format:

Note: 3D glasses are needed to see the pictures and also some of the photos demand yahoo/flickr account to get the access.

What have we achieved?

We were happy and satisfied watching our own 3D photo result on the screen. It was only two-day workshop and without using special camera (3D camera). However, their 3D photo could be compared with image taken by the experienced 3D photographer in flickr.

We plan to have a exhibition at the FdS to show the best 3D photo creations taken by the participants. The theme of this event is Multicultural Dialogue. The date of an exhibition will be announced soon.